We went back to Pisa on Friday for most of the day. I was surprised, but they actually let you climb up the tower. There are a lot of steps. The steps are all very well worn, as you’d expect from centuries of feet climbing up them. Climbing the tower is very odd. It is a large spiral staircase that leads up to the 7th floor. Here they number all their floor starting with the ground floor, or 0, then 1st floor etc, so 1st floor is not the ground floor. 0 based indexing! As you climb however, you move around the tower, and the slant of the tower is very apparent. Sometimes you’re leaning against the outside wall, sometimes the inside wall. Sometimes you feel like you’re falling down the stairs, othertimes the stairs are really really steep. 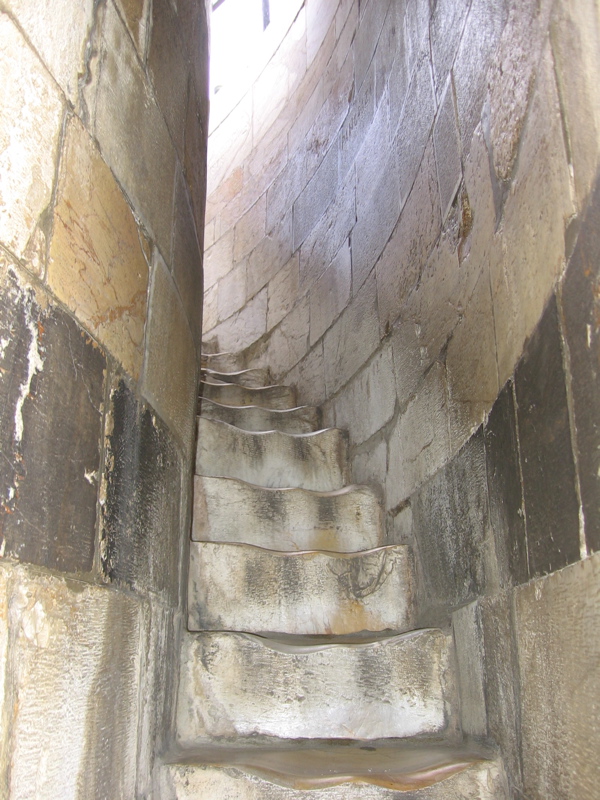 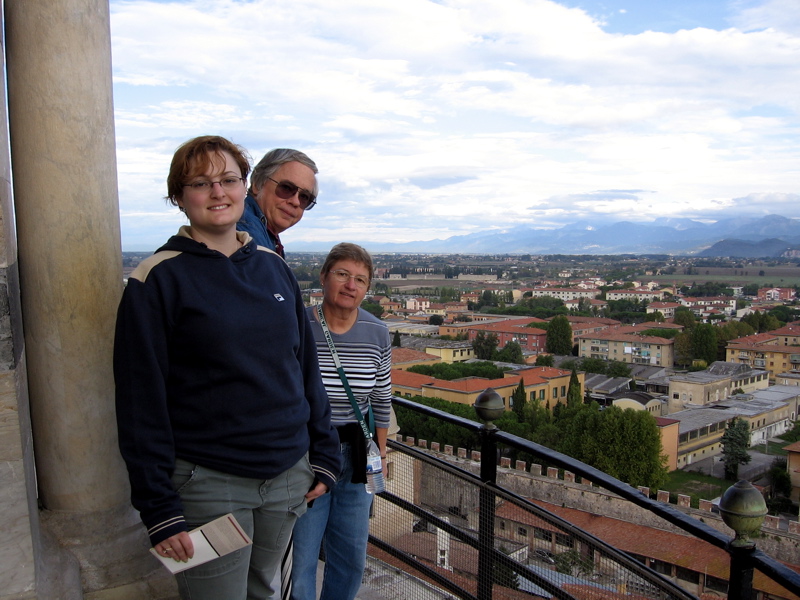 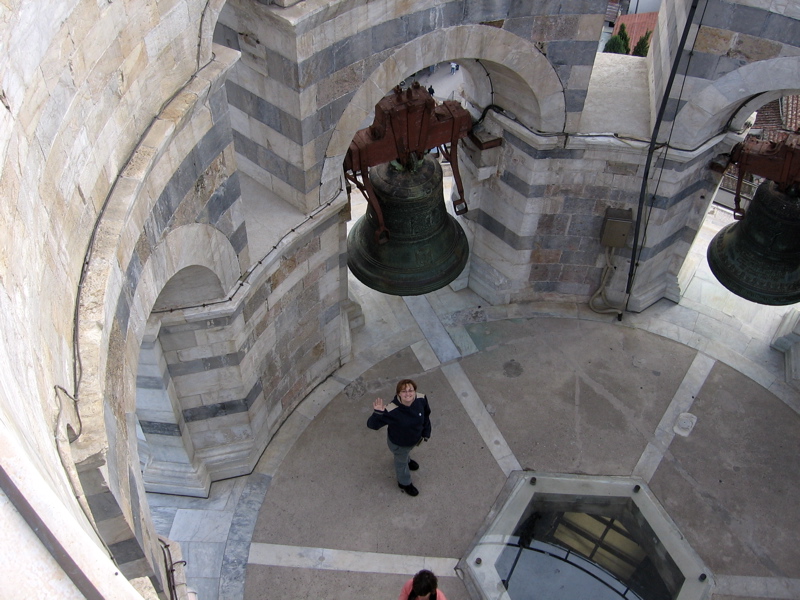 From the 7th and 8th floors you get a really great view of the city. On the 7th floor are the bells. Nothing would prevent you from reaching out and touching them except for a ‘Don’t touch the bells’ sign. Tourists in Italy must be more courteous I guess, something like that in the states would surely have been ruined by centuries of reach out and touch, maybe I could break of a piece and bring it home with me attitude. 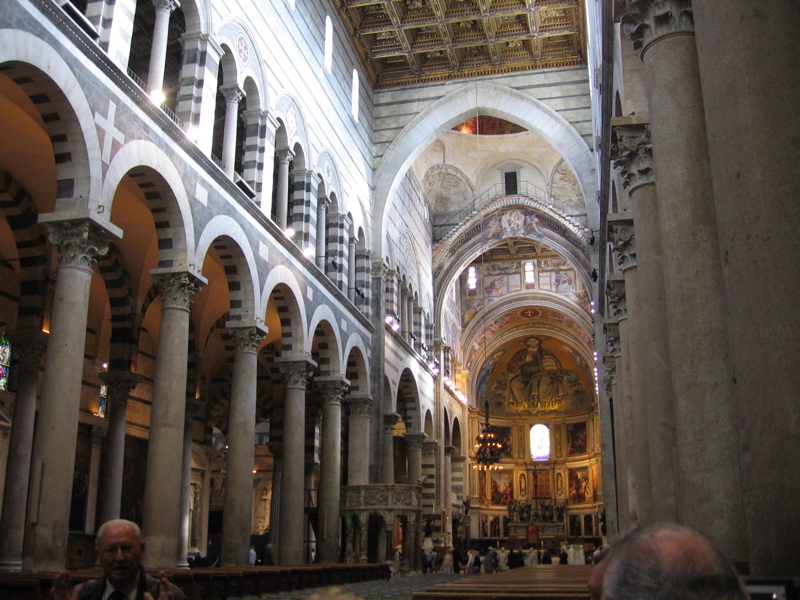 After the tower we went into the cathedral. They really know how to build churches in italy. There is detail everywhere. The little wells for the holy water are huge fountains topped with bronze sculptures. The pulpit is a massive 8 foot wide circular sculpture. The walls are covered with oil paintings depicting all manner of biblical scenes. The columns are all inlaid with cut stone, everything is just so detailed. I completely understand why it took them two hundred years to build this place. 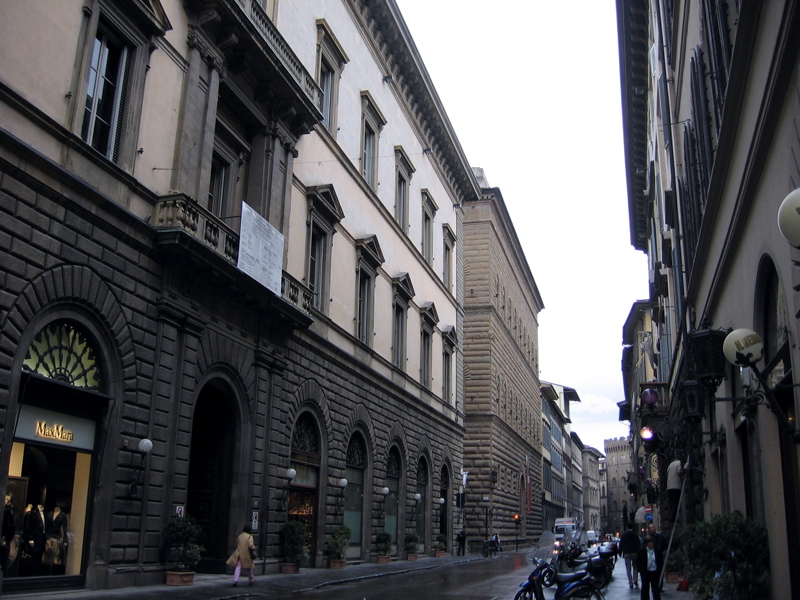 Saturday we got up way way too early so we could drive to Florence and meet Debbie and Michael for breakfast. Florence is a much larger city than Pisa, and was absolutely not designed for automobile traffic. We drove around in circles for about half an hour before finding the car park below the train station. The city is so interesting to just walk around in. There probably are buildings built in the last 50 years or so, but we didn’t see any of them. The whole city is sort of layered. The ground floors of all the buildings are shops. Coat shops, leather shops, shops that sell nothing but leather shoes. Pastry shops, butcher shops, tabacci shops, gelato shops. Everything you would need for daily living could be found walking up and down both sides of a single block in most places. The second floors seem to be offices. I’m mostly guessing at this but I did see someone coming down the stairs of one building with a briefcase… so I made a wild guess! The upper floors are where everyone lives. This is where we met up with Debbie and Michael. They were staying in a small bed & breakfast right in the middle of Florence. 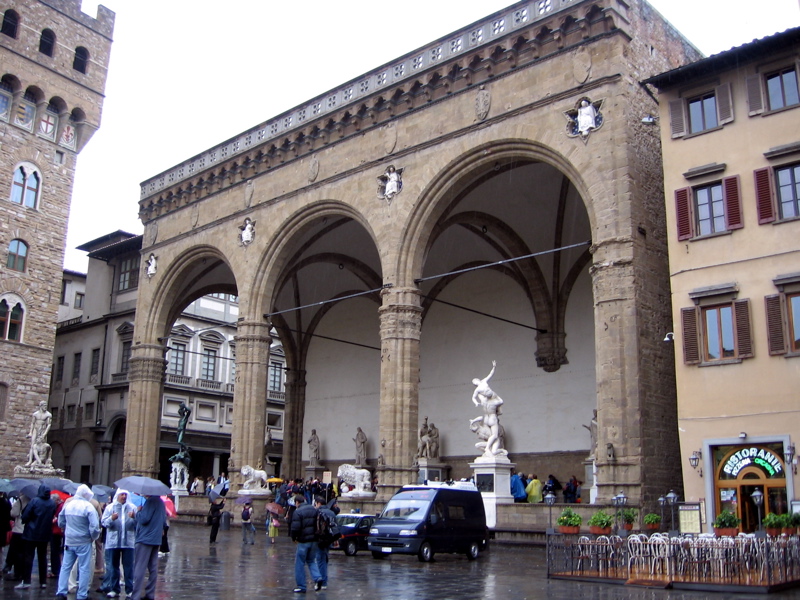 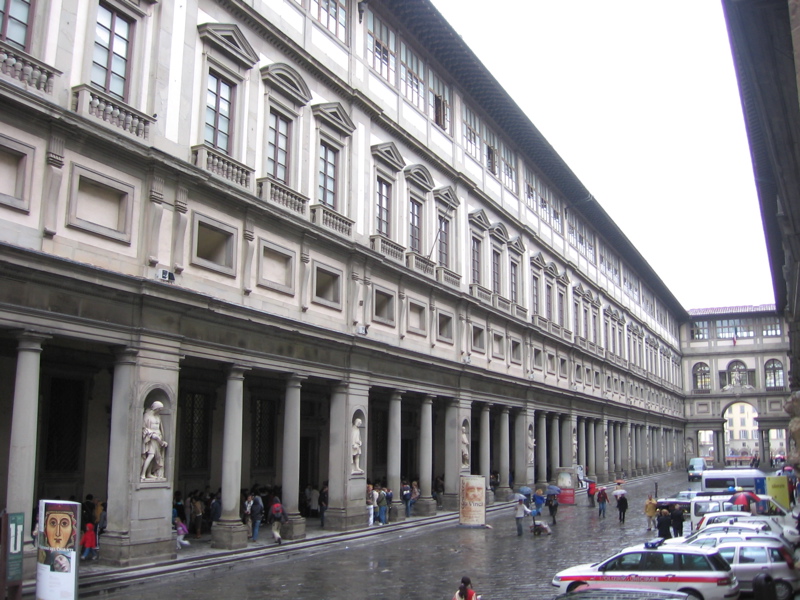 About a block away from the B&B we found the Piazza della Signoria, where there is a great open air gallery of sculpture, and the Uffizi Museum. Unfortunately they won’t let you take pictures inside the museum, so until I get some of our postcards scanned, no pictures of the insides. The Uffizi has a lot of stuff in it. Apparently at some point in the past, one of the rulers of Italy decided that the churches were bad, and had all the artwork from many hurches rounded up. Fortunately he didn’t destroy them, and after a while someone found it all and sent it to the Uffizi since they didn’t know where it had come from originally. There are several rooms filled just with these religious works. 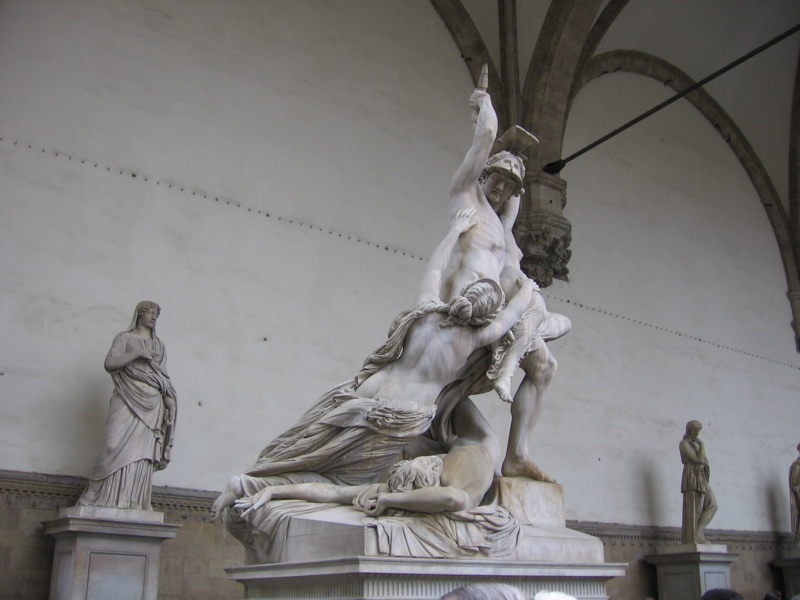 The one piece of art I really wanted to sneak a picture of was ’the birth of Venus’ by Sandro Bottichelli. She’s the one who was the icon for adobe Illustrator until CS. Most of the women in the paintings seem to be naked, and everyone is naked in the sculptures. There’s simply too many things in the Uffizi to describe, so go read about it if you want to know more! 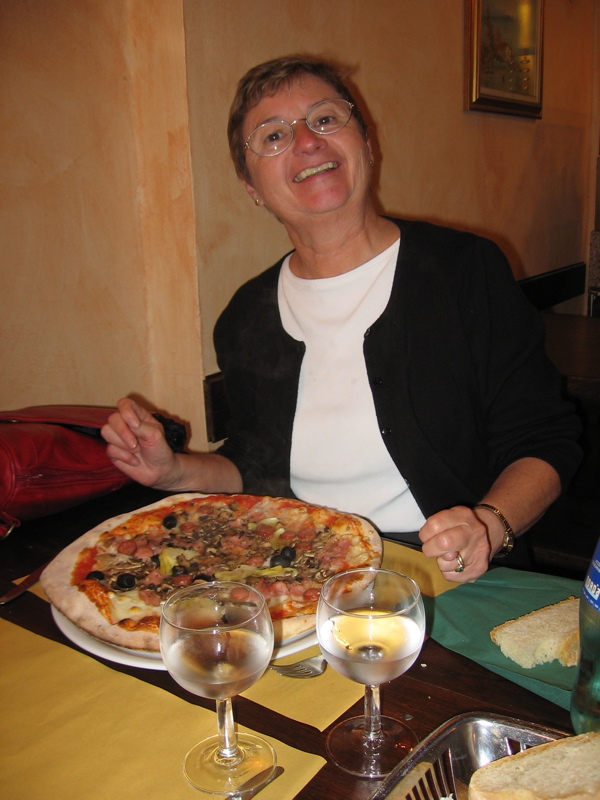 After that, it was time for lunch. Angela and I were feeling pretty rotten at this point, having both caught Marty’s cold. We had soup. Marty was feeling better however, and she had pizza.

Then it was on to the science museum, Museo di Storia della Scienza. Here was a wonderful collection detailing the birth of science as we know it today. There were navigational instruments from simple sundials to artfully wrought astrolabes. One of the things that struck me was the level of skill involved in those who made these tools, since each one was hand made.

The highlight for me were Galileo’s rooms. Anyone who’s taken physics will remember the incline plane experiment where he calculated the acceleration due to gravity. Well here was his original incline plane, complete with little position-able bells that ring when the ball passes under them. In the next room were his telescopes. He made several in his time, and in this museum are the first telescopes he made with which he observed the features of the moon, the planets, and got himself branded as a heretic. 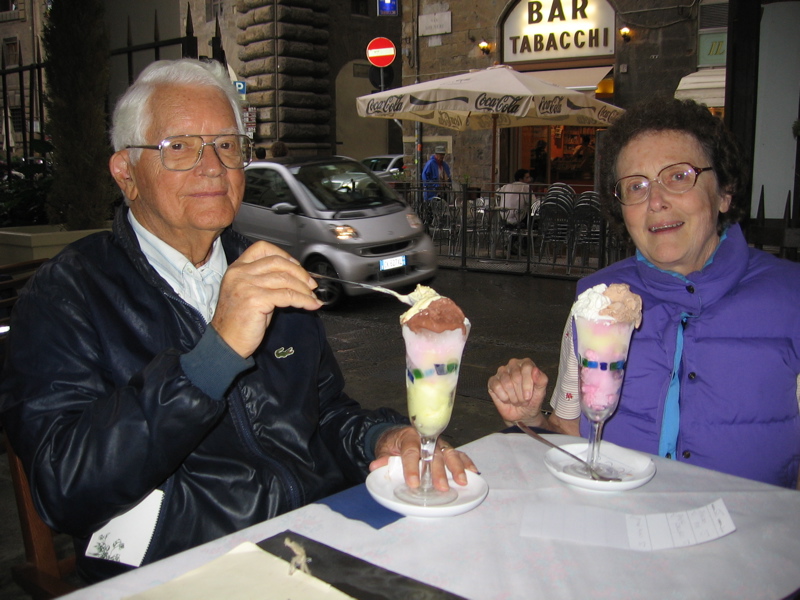 After this, Angela and I were completely exhausted, and Carl, Ann, Angela and I sat down at a cafe to have tea and gelato while the rest went to get the car.