Today was Lucca. This city dates from the Etruscan period (1000 BC - 250 BC), hence the name of the region, Tuscany in English, or Toscana in Italian. The Romans conquered the region in 200 BC. The Forum and Amphitheater can still be found, although buried by current buildings (which date from 1000 AD). 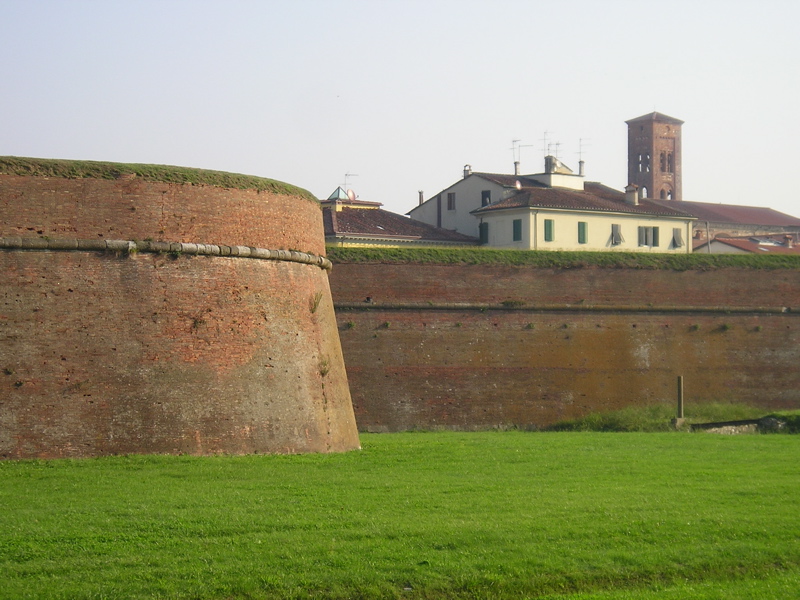 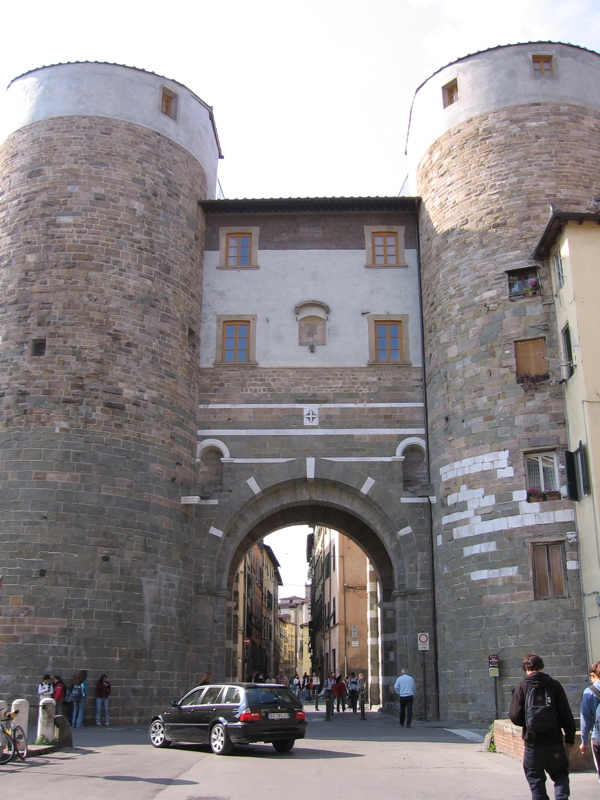 The first Roman walls and gates were enhanced and enlarged during the middle ages. We have a couple photographs of one of the mediaeval gates.

The modern city is surrounded by one of the best defensive fortifications found in Italy. They date from 1600 - 1700 AD. The city was conquered by Napoleon, who gave the city to his sister. She turned the fortification walls into a park, circumnavigating the entire wall. You can bicycle around the entire wall. Or you can walk, which we found to be a favorite activity of the lucchese.

We entered Lucca through the walking gate at Baluardo Santa Maria. Then up past the Piazza Napoleone to the Piazza San Michelle and the Romanesque church. Then on to Via Roma. From there we walked down to the Leonardo Da Vinci exhibition of working models based on his multitudinous drawings. Eric would have a field day. 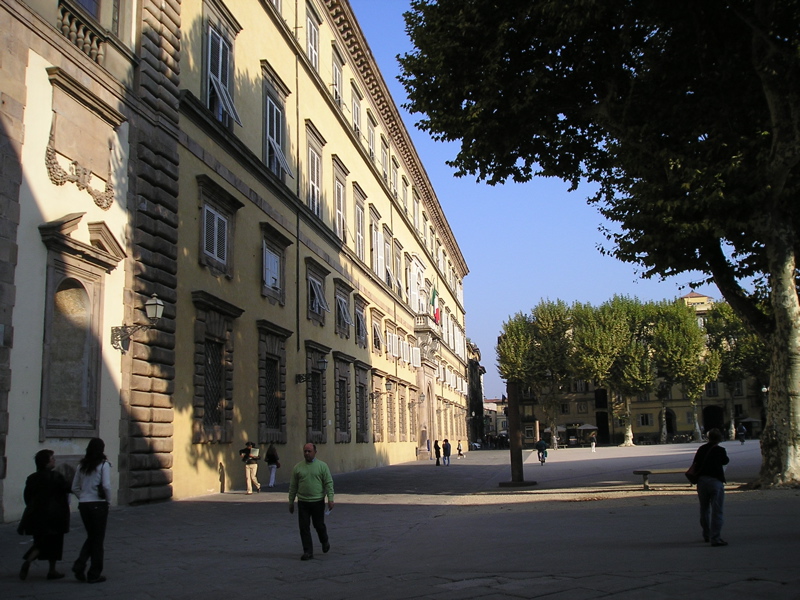 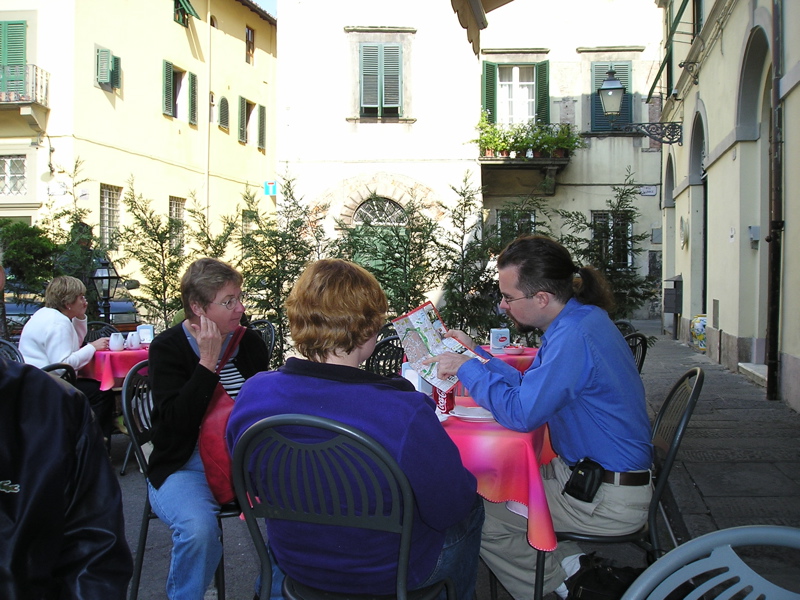 At this point we walked down Via Santa Croce, past wonderful (and expensive) small shops. We stopped for lunch at Trattoria le Collona. Two vegetable plates and two panini were 9 euros (about 11 dollars). A great price for Italy and a tourist. And they were served hot, out front on the piazza (see photo).

Following lunch, we walked out onto the Baluardo San Regolo. We took in the fortifications, their invincibility for the Renaissance period, and marveled at the work and treasure required for their completion. 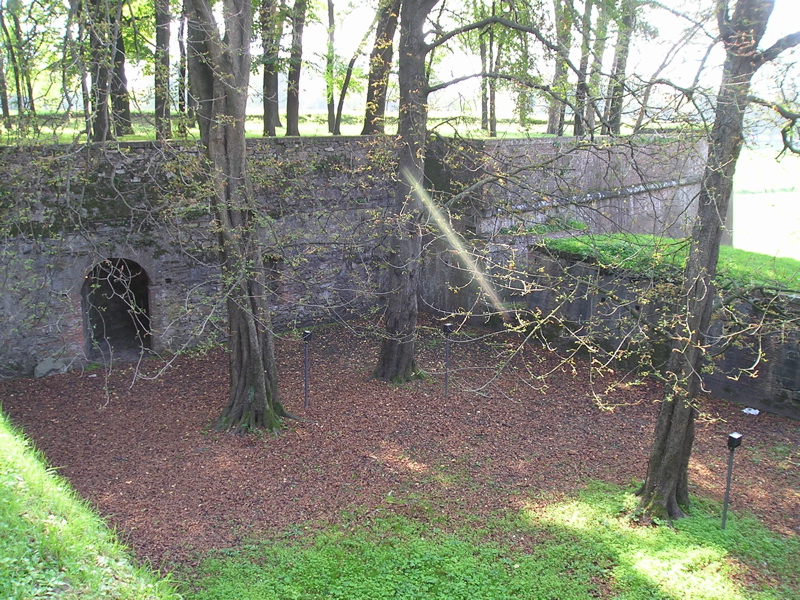 Then we walked down to the Orto Botaninco. The fee was three euros, not too bad for the botanical gardens themselves, but the bonus was an exhibit housed in the underground tunnels under the Baluardo. Here was a history of the city and it’s fortifications, prepared for the visit of a delegation from China. It was stunning. We have photographs from the tunnels, rooms and barracks within the Baluardo. We can see the firing slits, cannon powder rooms and billets for the soldiers.

Now the botanical gardens were no slouch, either. We saw a Cedar of Lebanon, planted in 1830, and a multitude of similarly ancient plantings.

We then hiked up to the Piazza San Francesca, where we succumbed to gellato. This is the smoothest, creamiest ice cream made, when well done. And my cardiologist will not take kindly to my consumption of this confection. 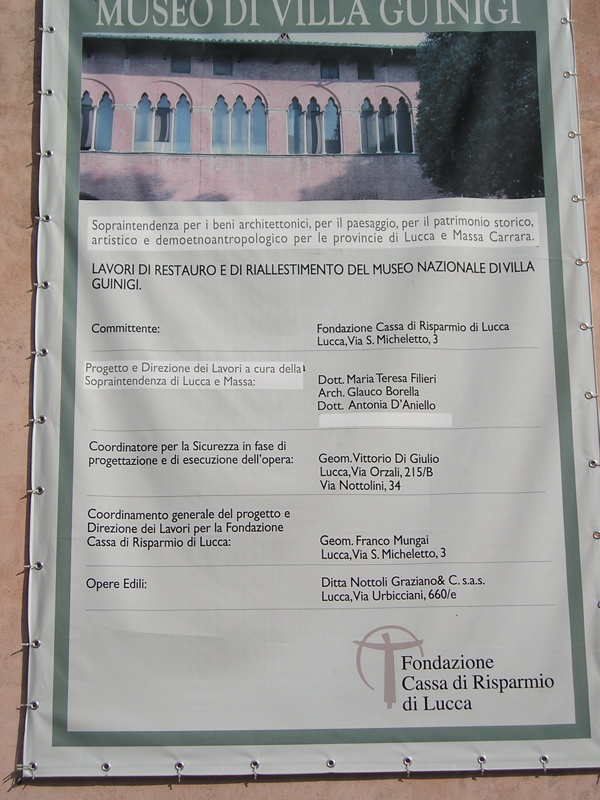 Following this treat, Mark and Angela went off to climb the Torre Guinigi (then tower of the Guinigi family) and get great pictures. Marty, Carl, Ann and I went off to the Villa Guinigi. This is currently undergoing an extensive rennovation, and being October, late for the tourista season, we were the only people in the building. It is a museum, and the works date from early Etruscan funereal works through the Roman period with tiles and frescos, up to Tuscan paintings from the 1100 - 1750 AD period.

At this point I received a cell phone call from Angela, saying they had found the Internet Point store and were plugged in. They had begun to download the updates to fischco.org for Monday and Tuesday. We then set out to find the Via Anfiteatro, and the address of what might be our evening dinner.

We walked along to the Piazza San Pietro Somaldi, and thence to Via Anfiteatro and the site of the Roman Amphitheater. What is left is a ring of buildings on the foundation of the amphitheater, and the center is a plaza with shops around the rim. We left Carl and Ann to sit in the sun while we went off to find Mark and Angela (and a much needed WC). We did find them, and they were setting up to play Warcraft across the wide wide ether. The friendlies online at the time were from the US (7 AM), Australia (1 AM) and of course, Lucca (5 PM). A good time was had by all.

We returned to the Amfiteatro, uncorked a bottle of wine and consumed some bruscetta.

Then we walked back down the Via Fillungo, a great shopping street, purchased two wonderful pieces of Tuscan cheese (one soft and one hard…and both smelling superb). Thence to the gate at Porto San Pietro, and left Lucca behind.

We returned to our apartment in Migliarino and dined on cheese and bread with red wine, cold roast turkey breast and fresh bread, and bruschetta con pomadorro, mozzarella e oregano. White wine was served, and dark chocalate was consumed with relish. David collected 25 euro per person for the dinner (yeah, right).